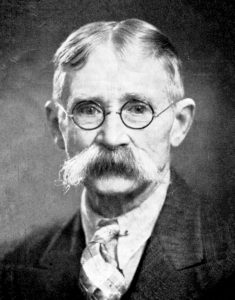 It was the late 1890’s and the industrial revolution was in full bloom. It was a decade which saw the invention of the X-Ray, the creation of motion pictures, and the modern-day submarine. It was also the decade which saw Oscar Eide start a small canvas products business in a port village along the shore of New Zealand.

By the early 1900’s, the Eide’s of New Zealand had become a well-established tent, sail and awning making company. Also during this period, the Eide family had a son who would later bring the family’s precision craftsmanship to America. As a boy, the son, Edgar Stanley Eide enjoyed working with heavy canvas and sailcloth. He even made awnings and other sewn items on the family’s large industrial sewing machines.

In the early 1920’s, as the United States began tightening its immigration laws under the leadership of President Warren G. Harding, two events were simultaneously occurring which would later shape the destiny of the Eide family business in America. The first event was Stan Eide’s successful immigration to the U.S. as a stowaway aboard a sailing ship, where he settled first in Seattle and worked for local sail makers. The second of these seemingly unrelated events was the formation of the High-Grade Tent and Duct Company. By the late 1920’s, Stan had migrated from Seattle to Los Angeles where he continued to work for small awning and canvas shops as a craftsman. 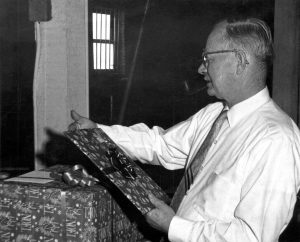 In 1938, just after the Hoover Dam was completed and the Fair Labor Standards Act was passed, Stan made his move. After sizing up several local companies, Stan bought High-Grade Tent and Duct Company. Thus establishing what was later to become Eide Industries, Inc.

Business was tough in the early years. Germany had already invaded Poland and World War II was in full swing. But the company hung on making military tents and other war effort products for the U.S. Armed Forces. With the return of the American soldiers just after the Second World War, there was increased demand for awnings and related canvas products. Stan’s company, still named High-Grade Tent and Duct, began to grow.

The latest in precision machinery has always been a factor in Eide’s success.

In 1950, the company was able to buy a Fails Multiplex 20-Needled Commercial Quilting Machine; and with that purchase landed a large contract to make moving blankets for the Bekins Moving Company. During this period of growth and prosperity, Stan was forced several times to move the company to larger quarters in order to handle the increased volume. And with this increase in volume, his two sons were called upon to help manage the family’s business. 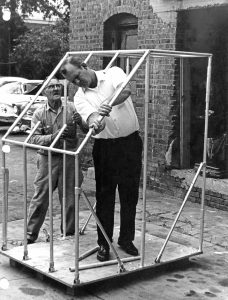 By 1955 Stan, his sons (Jack and Jim) incorporated in the state of California under the official name of Eide Industries, Inc. From this point on, there was no stopping Eide Industries. Over the next 18-years, Eide would acquire Los Angeles Awning Company, Glendale Awning & Tent, Tech Sew Company and many other local awning and canvas shops. 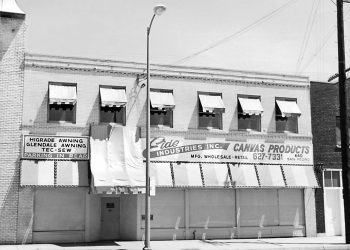 Finally in 1973 at the age of 70, Stan retired from the awning and canvas business he so dearly loved. Though his retirement marked the end of a spectacular career for Stan Eide, it signaled the beginning of a whole new era for Jack and Jim Eide, and their two new partners, Don Araiza and George Ochs.

This changing of the guard was not the only change at Eide Industries. With it came a renewed commitment to the organization, a fresh energy level, better products and new markets. It was an exciting time of growth. During this period, Eide bought Santa Ana Canvas, Long Beach Awning & Tent, along with several other companies and their product lines.

The new force of Jack, Jim, Don, and George worked well together from the beginning, each managed a different part of the business.

In fact, between 1973 and 1981, Eide was able to quadruple its business using the same formulas Stan had used 20-years earlier; hard work, precision craftsmanship, and strategic acquisitions. 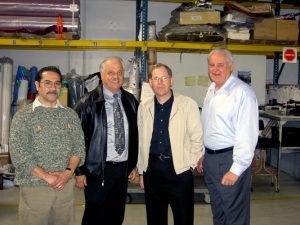 Although the 1980’s saw the retirement of both Jack and Jim Eide, the 80’s also gave the company a new energy with the addition of two new partners, Jesse Borrego and Joe Belli. The new partnership then proceeded to forge Eide’s name throughout the industry by becoming prominent board members for the Industrial Fabrics Association International (IFAI), Western Canvas Products Association (WCPA), and later the Professional Awning Manufacturers Association (PAMA).

By the late 90’s, technology was in full swing. Eide invented and produced EideCAD, the first awning and canopy bidding and drafting software, which was distributed throughout the industry. And with the creation of the Internet, EideIndustries.com went live. The 2000 decade that followed saw the launch of several websites ( EideStructures.com, RaceCanopies.com, ResortCabanas.com, and TensionStructures.com) which complimented the newly established sub-divisions at Eide.

As the next step towards retirement and after 35+ years of dedicated service, George Ochs relinquished his partnership with Eide in 2008.  This opened the door of opportunity for Dan Neill to serve a short-lived tenure as a member of Eide’s lineage from 2009 to 2018.

Then after 38+ years with Eide and over 46+ years in the Industrial Fabrics Industry, Joe Belli announced his retirement in 2019 bringing an end to an era of priceless contributions.

All of Eide Industries products are built with fine workmanship, that came from Stan Eide’s values of quality and excellence. Forged long ago in that port village along New Zealand’s shores, and brought to America.